notes on schizophrenia and autism and how hard it can be to distinguish between the two in younger children.

Common symptoms of schizophrenia prodrome covering the five domains include:

Difficulties with concentration and focus

Decline in hygiene and self-care skills

Low energy and a lack of interest in previously enjoyable activities

Odd speech patterns, marked by too many or too few words, or an indirect and imprecise form of self-expression

Unusual or clearly irrational beliefs, bordering on (or crossing into) the delusional 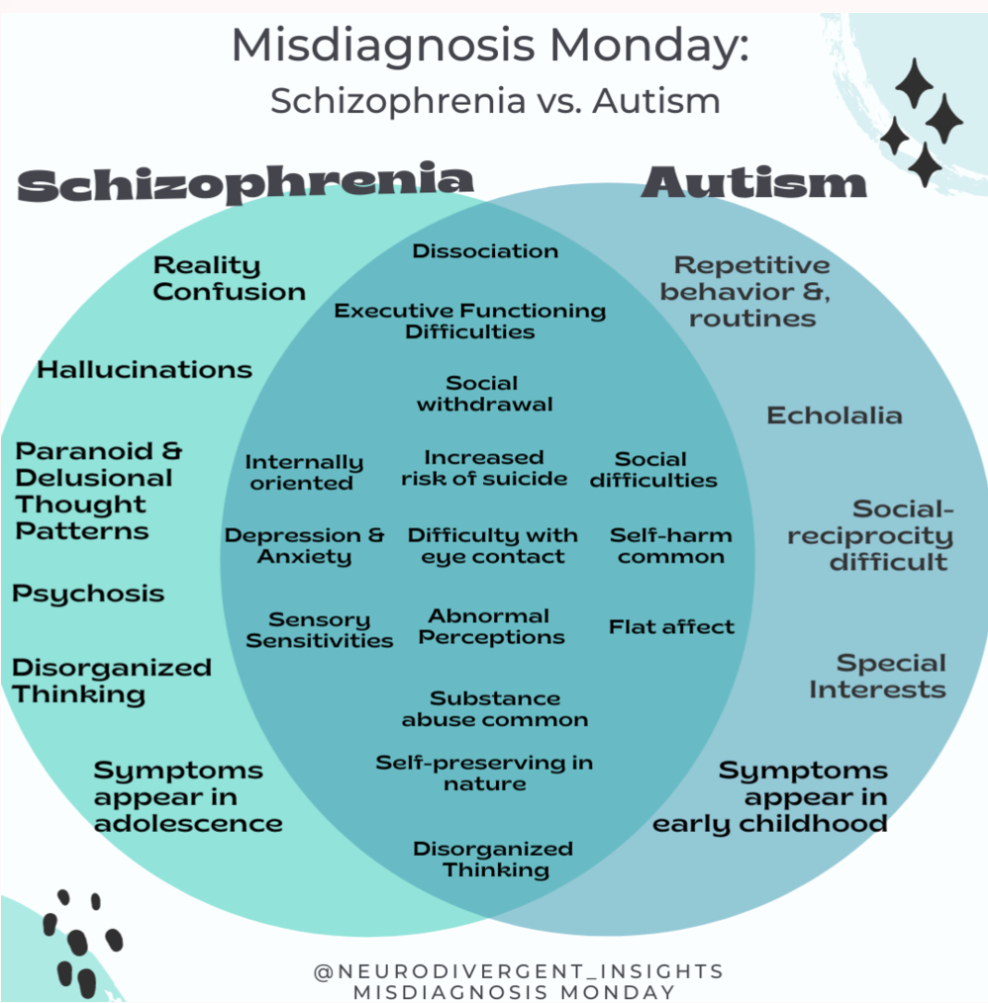 A 2017 studyTrusted Source shows that a deletion on chromosome 22 may lead to the development of certain disorders, including ASD and schizophrenia.

But according to another 2017 study, they’re unlikely to develop together. Scientists think that ASD and schizophrenia may be two different outcomes from the same genetic syndrome.

Both ASD and schizophrenia are neurodevelopmental disorders. That means they affect how the brain develops. Through brain imaging, scientists can see similarities between the brains of autistic people and those with schizophrenia.

According to 2018 research, similarities include:

Before positive symptoms occur, children usually show warning signs. According to 2014 researchTrusted Source, these may include:

The Swiss Psychiatrist Paul Eugen Bleuler coined the term “autism” as a key feature of Schizophrenia in 1911 (Evans, 2013).

During an active episode of schizophrenia, a person struggles to distinguish between what is real vs. unreal. They may have active delusions, hallucinations, paranoid thinking, disorganized speech and thought patterns, disorganized body movement, and lack of motivation

Additionally, underlying executive functioning difficulties may be exacerbated during a flare of symptoms

Negative symptoms refer to a decreasing or absence of typical experiences/actions. Examples include: flat affect, difficulty with expressing emotions, diminished sense of emotions, reduced pleasure, failure to initiate activity, and sudden decrease in motivation. Other negative symptoms may involve difficulty organizing and initiating plans or limited ability to speak. Negative symptoms is where most of the overlap with Autism lie.

Difficulty with logical and linear thinking, disordered thinking processes, bizarre behavior, and abnormal body movements. The person may have disorganized speech meaning they do not say complete sentences and others often have difficulty understanding what they are saying.

Several genes have been identified that potentially play a role in autism and schizophrenia. Interestingly several of these genes (approximately 15-25%) increase the risk of both autism and schizophrenia (Vortsman and Burbach, 2014). This discovery of this genetic overlap has led to new conversations about the shared phenotypes and shared etiological and biological pathways for both conditions (Vortsman and Burbach, 2014). Furthermore, these conditions appear to co-occur at higher rates than in the general population.

Psychosis/hallucinations, like Autism, is also on a spectrum. They can be intense and can lead to a blurring of reality/non-reality, or they can be fainter in nature (the knock you thought you heard, the music you hear playing in the background, the touch you thought you just experienced).

In the context of autism, the auditory perceptions/hallucination-like experiences are on the milder end of the psychic spectrum. Having an experience that causes one to be unable to distinguish reality from non0reality (i.e. Psychosis) could not be attributed to autism alone

Differences in the auditory system (hearing) are the most widely documented area of sensory concern among people with schizophrenia.

Children with both may present with language delay, social withdrawal, be prone to fantasy, and a tendency to get “lost” in their internal world.

Disorganized thinking and paranoia are well-known features of Schizophrenia. Many autistic people experience significant anxiety when under pressure which can present as disorganized thinking or paranoid thinking. This tends to worsen when they are asked to task-switch amidst pressure/anxiety (Berney, 2000). Autistics who have experienced discrimination and bullying are also more vulnerable to paranoid feelings and thought patterns.

Social withdrawal, communication impairment, and poor eye contact seen in ASD are similar to the negative symptoms seen in people with Schizophrenia

In a study done by Cheung et al., 2010. people with ASD and Schizophrenia had lower gray matter volumes within limbic-striato-thalamic neurocircuitry. There were slight variations, as the gray matter was reduced in the amygdala, caudate, and frontal and medial gyrus for Schizophrenia, while it was reduced in the putamen for Autism. Cheung et al. demonstrated clear overlap in terms of brain volumetrics, suggesting that Autism and Schizophrenia likely share a common etiology.

Both groups have an increased risk of suicidality and an increased risk of dying by suicide. Approximately 4.9% of people with schizophrenia die by suicide (Palmer et al., 2005), rates are higher among men and among those who had co-occurring substance conditions (Hor et al., 2010) Autistics with average to high IQ are three times more likely to attempt or die by suicide than the general population (South et al.). Suicidality was particularly high among youth and young adults and was more elevated among women than men (South et al.)

Substance abuse is high among both groups. Nearly half of people with schizophrenia will have a substance abuse disorder at one point in their life Volkow N. D. (2009). A recent study in Sweden found that folks with Autism with average to high IQs were twice as likely to struggle with addiction to alcohol or other drugs.

Autistic adults are at an increased risk of experiencing interpersonal violence. In one study, Autistic adults were 7.3 times more likely to endorse having experienced sexual assault from a peer during adolescence (Weiss and Fardella). Fitzgerald et al. 2005 study found an increased risk of victimization (both violent and non-violent victimization) among people with schizophrenia. And women with schizophrenia have higher rates of being sexually victimized (Goodman and Harris, 1995).

How To Spot the Difference

Given criteria A symptoms may overlap with Schizophrenia negative symptoms, it is essential to assess for the presence of criteria B symptoms (rigidity and repetitive behaviors, special interests, sensory issues).

When assessing for Autism, if you aren’t also considering Schizophrenia, you may discount negative symptoms of Schizophrenia as criteria A for Autism. If it doesn’t occur to you to rule out schizophrenia, you may not consider assessing for positive symptoms of schizophrenia and thus the Schizophrenia may be missed. To assess positive symptoms, include consideration of delusional thought patterns, paranoid thoughts, and the presence of hallucinations. However, be aware that abnormal perceptions are more common among autistic adults. Overall patterns, the intensity of paranoia and hallucinatory experiences, and the level of insight into the experiences must be considered (i.e., is there good insight into reality vs. non-reality).

The PAI has both a schizophrenia scale (SCZ), and emerging research suggests the PAI can also help capture the likelihood of Autism. Based on the research of Harrison et al (2020) an ASD-Differential calculator was created. You can input PAI results here and receive a score that provides the likelihood of an Autism diagnosis.

Brain imaging of schizophrenic brains has revealed that networks involved in introspection and those for external attention bleed into one another, as they do in healthy brains on psychedelics

Buspirone prevented some psychotic effects of psilocybin, the researchers found. They hypothesize that by binding to serotonin 1A receptors, which pair with and counteract the serotonin 2A (psilocybin) receptor, buspirone restrained the visual hallucinations, flood of memories and imaginative thinking commonly triggered by psilocybin. The drug had no impact on other psychedelic symptoms such as the anxious sense of ego dissolution or the fear of going insane that some people experience, nor did it prevent decreased alertness during the trip.

The psychotic effects blocked by buspirone are also common in early schizophrenia and Parkinson’s.

fixation on repeating behaviors, even play, according to a specific regimen

pronounced and sustained fear of certain events, situations or objects (note: while nearly all children experience specific fears as a normal developmental stage, children with early-onset schizophrenia tend to experience an extreme degree of fear that does not subside)

auditory hallucinations (the perception of sounds that others do not hear); most often, these hallucinations manifest as loud noises, whispers or collective murmuring

extreme sensitivity to sounds and lights

frequent self-talk (note: while many children will go through phases of having an “imaginary friend” or occasionally talking to themselves, children with possible early-onset schizophrenia spend the majority of their time conversing and laughing with themselves while shutting out real people and surroundings)

tendency to be very “closed off” from others

visual hallucinations (seeing things that are not actually there); common examples include streaks or swirls of light or flashing patches of darkness

awkward, contorted or unusual movements of the face, limbs or body

complaints and suspicions of threats, plots or conspiracies (for example, “someone has been sent to spy on me”)

dwelling excessively on perceived slights, failures or past disappointments

inability to read nonverbal “cues” (failing to understand and respond appropriately to other people’s tone of voice, facial expressions or body language)

inappropriate behavior and responses to social situations (for example, laughing out loud during a sad moment)

assignment of “special meaning” to events and objects with no personal significance (for example, watching a famous person on television and believing they are conveying a secret message with their words or gestures)

assumption of extravagant religious, political or other authority (“I am God”)

belief that another person or entity is controlling one’s body, thoughts or movements

belief that an evil force, spirit or entity has “possessed” the body or mind

long periods of staring without blinking or difficulty focusing on objects

seeing or hearing things that others do not

talking aloud to oneself, often repeating or rehearsing conversations with others (real or imaginary)

tendency to rapidly shift topics during a single conversation

use of “nonsense” or made-up words

withdrawal from friendships and activities

It is important to note that, in the case of all of the above warning signs, a child or adolescent with schizophrenia is not aware that these behaviors pose a problem. A schizophrenic child does not have a sense of becoming ill or that something is wrong. The gravity of the situation is only apparent to outside observers.